The National Congress of Black Women, Inc. (NCBW) is a 501(c)(3) non-profit, civic organization dedicated to the educational, political, economic and cultural development of African American Women and their families.

NCBW also serves as a nonpartisan voice and instrument on issues pertaining to the appointment of African American Women at all levels of government, and to increase African American women’s participation in the educational, political, economic and social arenas.

We’re The Organization That Brought Truth to the Capitol

In 2006, President George W. Bush signed into law, the authority for the Sojourner Truth bust sculpture to be donated by the National Congress of Black Women, Inc. on Capitol Hill.

The sculpture bust of Sojourner Truth was unveiled on April 28, 2009 in the Emancipation Hall in Washington, DC.  The sculpture was done by Artist,  Artis Lane of California and member of NCBW Los Angeles Chapter.​

NCBW National President speaks the truth about Sojourner Truth and the bust on Capitol Hill in this video.

The founding members are:

To train and educate youth on the responsibilities of good citizenship and encourage them to register, and to vote as well as to learn and understand the functions of government

To provide opportunities for internships at the local, state, and national level

To participate in the formation and development of public policy that impacts African-American women, their families, and communities

What We Stand For

Enriching our communities througheducation and service

Increasing accessibility for registered, eligible voters to exercise their right to vote

Building a healthier and sustainable community

Exposing our children to environments of success

To build a network of women of color in leadership, sustainable entrepreneurship, and civic engagement while increasing access to technology and building social enterprises that eliminate gender and racial bias.

To empower and engage Black women in utilizing their voices in the decision-making process; to develop local solutions to cultural, educational, economic, and political issues that affect Black communities.

The National Congress of Black Women, Inc. is dedicated to the education, economic, political, and cultural enrichment of Black women, their families, and the community.

“The power of the ballot we need in sheer defense, else what shall save us from a second slavery?”

Under the leadership of Founding Chair Sylvya J. Stevenson, the Kansas City Chapter of the National Congress of Black Women, Incorporated received its charter from the national chapter on Thursday, November 7, 2013. The charter was presented by national board member Judy Matthews on behalf of the national president, Dr. E. Faye Williams, Esq. The installation was held at Bruce R. Watkins Heritage Center in Kansas City, Missouri.

To empower and engage Black women in utilizing their voices in the decision-making process; to develop local solutions to cultural, educational, economic, and political issues that affect Black communities.

The formation of the Kansas City Chapter began in March 2011 and required the organizing chair to identify nine women committed to both carrying out the efforts to acquire a charter and help recruit active members to meet the annual 25-member requirement in accordance with the national bylaws.

The Articles of Incorporation for the Kansas City Chapter was established with the State of Missouri on October 23, 2013.

The chapter was legally formed as a 501 (c) (3) not for profit, sister organization under the National Chapter in accordance with the national bylaws on November 7, 2013. The Kansas City Chapter was determined to establish a foundation so that the organization may continue to empower black women through unity, sisterhood, leadership, and advocacy.

During the year of inception, the chapter launched its first program – the Annual Youth and Parent Back to School Breakfast – to heighten awareness of healthy eating and increased physical activity at home with family. The NCBW Los Angeles Chapter and local organizations like 100 Black Men of Greater Kansas City and Mount Zion Missionary Baptist Church supported our efforts as a new non-profit business. Job Corps, CHES, Inc., Save A Lot Stores, and Blue Hills Church of the Nazarene also offered partnerships.

In the first full year of existence, the Kansas City Chapter hosted career and resume workshops at local women shelters to provide resources and skill-training necessary for landing jobs. Additionally, with the support of the U.S. Department of Education and Equal Education Opportunity Center (EEOC) agency, the chapter hosted a college financial aid seminar for parents, their children, and students.

In 2014, the chapter held its first Election of Officers and LaNeise Butler was voted First Vice Chair.

The first Voter Education Workshop was launched that same year. Coalitions were formed by other non-profit leaders and community agencies in different areas of the City – and the Kansas City Chapter was invited to have a seat at the table.

The legacies of the NCBW National Founder and First National Chair Shirley Chisholm and her successor Dr. C. Delores Tucker lives on through the women of our chapter. As African-American women eager for leadership and entrepreneurship opportunities, we’re honored to have established a legacy of our own in the Kansas City Metropolitan area. 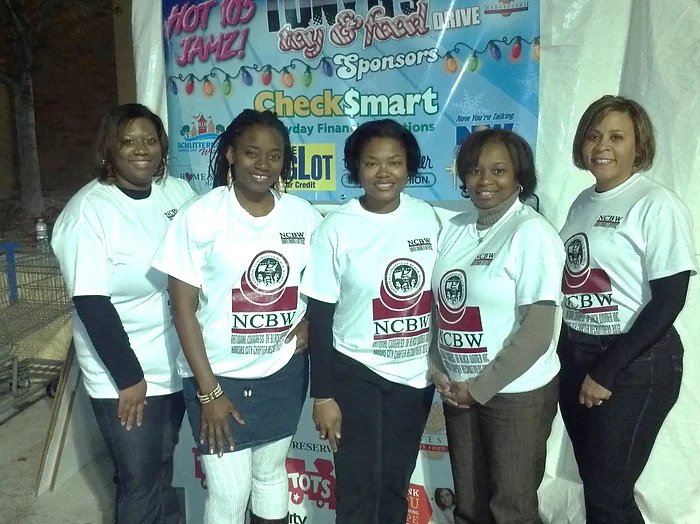 Thank you for your interest in becoming a member of the National Congress of Black Women – Kansas City Chapter!  Membership is growing rapidly throughout the United States, including our area, at an unprecedented rate – a growth that’s credited to the significant impact our organization makes in the empowerment of Black women. Through our programs and services, we’re committed to representing and reflecting the local voice.

Being invited to join as a member is an esteemed honor and your role is critical in fulfilling the mission of the organization.

passionate about improving the educational, social, political and economic status of African-American women and their families

Passionate about improving the educational, social, political and economic status of African-American women and their families